The diagrams below illustrate the various connection diagrams for capturing iPAD, iPhone and other iOS based VGA , DVI or HDMI display outputs.

Integrated Streaming and Recording of iPad, iPhone and other iOS Devices

Lecture Recorder x2 is an integrated solution for recording VGA, DVI, HDMI out from iOS devices such as iPad, iPhones. Lecture Recorder x2 captures, encodes, records and streams the display from the iOS device. The device also has the ability to record an audio source and a camera source to create picture with picture demonstrations of iOS apps. Designed for presentation applications, Lecture Recorder also integrates a built in splitter with automatic conversion of VGA/DVI into both VGA, DVI and HDMI out. 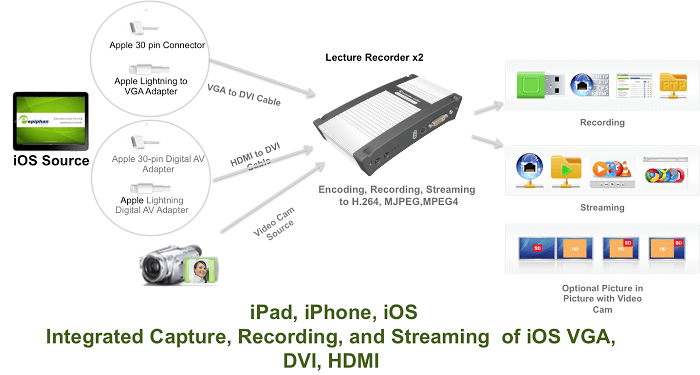 This instruction explains how to capture and record images and streaming video from iPad. Whether you need to save any sequence of images or video you see on your iPad for media, app demonstrations and training, or gaming.

The Epiphan frame grabber device acquires the video stream and images from iPad and enables you to save it on a PC, MAC or Linux host computer. Effectively, the frame grabber makes iOS devices look like an external camera source to your computer.

To capture iOS video, you will need the following:

Download the Epiphan drivers and Capture Tool from our web site. (https://www.epiphan.com/support/)

The example below continues for a Windows installation, to install the software for MAC or Linux based capture computers, please consult the product documentation.

Step 4: Record a Video from iPad

You can also use third party applications to capture iOS video with DVI2USB 3.0 using Epiphan’s interfaces to DirectShow (Windows), QuickTime (MAC) and Video4Linux (Linux ). Many popular applications like Windows Media Encoder, VLC, OBS and QuickTime use these interfaces. The DirectShow, QuickTime and V4L interfaces are installed as part of the Epiphan software package. Simply start your third party application and look for a way to change the webcam you’re using. Your DVI2USB 3.0 appears in the list.