Over the past few months, attendance to the special events at the Palo Alto Art Center (PAAC) has been inconsistent. PAAC was looking for a way to quickly and easily release marketing materials across multiple online platforms and increase their attendance. The Art Center also wanted to broadcast events for those who could not attend in person and provide an equally engaging experience online.

The search for a secure live streaming solution

Miki Shim-Rutter, the Adult Studio Program Event Coordinator at the PAAC, had an idea. With the Center’s International Cultural Exchange Week quickly approaching, she decided it would be a great opportunity to live stream some of the events during the week. This would promote the event as well as raise overall interest toward the Art Center.

Parag Kumar, the Technical Director responsible for network and hardware infrastructure at PAAC knew that almost all the infrastructure required for live streaming was already in place. Having much of the necessary AV equipment (cameras, microphones, an AV rack) already available in-house, they were essentially only looking for a reliable video encoder. Parag started asking his colleagues if they had a solution in mind and one of them mentioned that they had recently helped install a Pearl hardware encoder at the Palo Alto Junior Museum and Zoo. After researching the product and the company, Parag ordered a Pearl-2, confident that it met the requirements.

Setup and configuration was straightforward. Once connected to the network, Pearl-2 displays its IP address on the front-panel touch screen. Once the IP is typed into a browser, the WUI can be accessed. The WUI allows for monitoring, controlling and configuring of Pearl-2. This can also be accessed remotely through a secure login.

“Security is always a top priority at the Palo Alto Art Center. Since it is a city run organization, we must be very careful as to what we allow into our network. Thankfully the Pearl 2 was very easy to whitelist. Also, thanks to the secure remote access capabilities, I could fully configure the device remotely without ever needing to leave my office.” Parag Kumar, Technical director at PAAC

The Palo Alto Art Center has live streamed three events to date: the Artist Reception and Showcase Exhibition, both taking place in a large, AV equipped auditorium, as well a Workshop Demonstration, which took place in the art studio. For the Reception and Showcase, the organizers connected their own camera, microphone, and projector outputs to the Pearl-2 and live streamed to YouTube and Facebook. For the studio workshop, they set up multiple cameras around the demonstration area, and used Pearl-2 to switch between close and wide angle shots. The workshop went live to a sponsor’s Facebook page, The Palo Alto Art Center Community page and the artist’s Youtube channel.

“The Pearl-2 just worked. After our Technical Director set it up, all I had to do was press a button and boom! I can instantly see on my phone that we are streaming live to the Art Center’s page, to our sponsor’s page, and to the presenting artist’s Youtube account too!” Miki Shim-Rutter, Palo Alto Art Center Adult Studio Program Event Coordinator and Assistant

Pearl: the key to the PAAC’s livestream

During the reception, the Pearl-2 captured two sources: a camera, and the presenter’s laptop for slides. The camera was placed in the middle of the room pointing at center stage. The position of the camera captured everything the viewer would want to see, the speaker behind the podium and the projector. Since capturing a projector screen in a dark room with a camera does not amount to the best picture quality, the presentation from a laptop was captured separately using an HDMI splitter. The speaker was then cropped and placed next to the “clean” presentation screen in a separate layout.

Live streaming and producing a workshop presented itself to be a bigger challenge than a reception. Viewers present at the live workshop are able to closely observe the artist giving the demonstration. The viewers are able to carefully view what motions the artist is making with their hands to create specific textures while also focusing on the artist’s posture and body movements. PAAC really wanted to capture and translate that intimate nature to the online viewers. 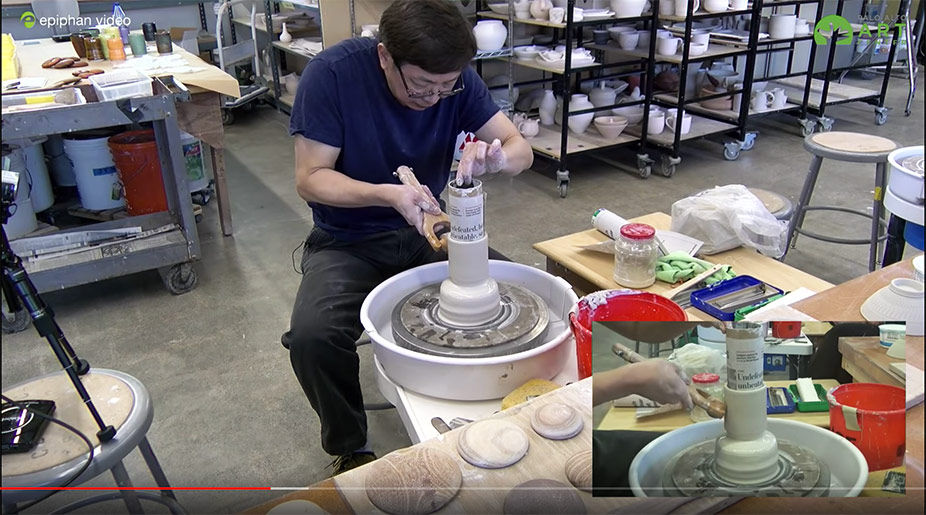 Both cameras were streaming together, in real time. In addition to the two isolated camera views, a picture-in-picture layout was used to overlay the two camera feeds. This way, the viewers can see exactly how the artist is positioned while executing their technique. Pearl-2 allows the user to create any sort of layout from the video and audio sources, as well as overlay preloaded images like logotypes. Switching between these layouts was incredibly smooth.

Ultimately, this setup allowed the online viewers to have a more intimate experience and leave with a better understanding of what was taught in the workshop.

For the closing exhibition the Palo Alto Art Center wanted to cover a large area with a single camera, without cables to manage. The camera needed to be able to roam around the auditorium freely, capturing artist interviews and their work. In order to wirelessly transmit audio and video signal, an HDMI wireless connection kit was used. Since the transmitter only requires 5V of power, a USB battery bank could be used for power. The transmitter was mounted onto the rig and connected to the camera via HDMI, while the receiver was connected to Pearl-2 using the same method.

The Pearl-2 was setup by Miki and her team. They helped position cameras, tape down wires, and integrate different audio systems the PAAC already had in place. Technical configuration of the unit was done by Parag, he configured the stream, built all the layouts, and uploaded all the graphics from his desk at work. Operation of the device during the livestream was done on site by Miki. She used her iPad with Pearl’s “Epiphan Live” the easy to use, browser based application designed for confidence monitoring, switching between layouts, and to easily stop or start streaming and recording.

With the help of Pearl-2, the Palo Alto Art Center was able to broadcast key sessions of the International Cultural Exchange Week. During the broadcast, members of the Palo Alto Art Center community were able to tune in and participate in learning techniques from the masters of ceramics. Because of Pearl’s multistreaming capabilities, the broadcast was streamed to a Facebook group, a sponsors’ public Facebook page, and the artist’s own Youtube channel, all at the same time. Pearl’s layout editor simplified the switching process and added much needed production value boost to our live streams. Finally, the setup was seamless, and the remote access feature made managing the Pearl-2 absolutely painless.

The Palo Alto Art Center started with a goal: to increase online visibility and reach while also developing physical traffic at the art center. When they decided to try live streaming, they decided that for their first run, they would do no marketing at all. To their surprise, the PAAC was able to reach live viewing numbers higher than ever before. After the live streams, these videos remain as VOD (video on demand) on their respective platforms and have accumulated thousands of views.

The Palo Alto Art Center is now able to offer a high-quality live stream, that almost matches the quality of being there in person. Going forward, the Palo Alto Art Center may even find a way to monetize these live streams. This way, they can broadcast the demos and presentations to anyone willing to pay a small fee to view it, which could also be a good way to add revenue.

“Epiphan’s Pearl-2 worked flawlessly. I didn’t even notice we were streaming until I saw all these questions and comments on our Facebook page.” Fanny Retsek, Studio Program Director

Epiphan Video would like to formally thank the Palo Alto Art Center for letting us be apart of their live streaming solution. We recognize all the hard work the staff at the Palo Alto Art Center put in every day to give the public a creative outlet and we are thankful that we could streamline some of the marketing and remote learning they wished to achieve.The Palo Alto Art Center is a city-run organization that has facilities for painting, ceramics, and jewelry making. The art center also has a gallery and a large auditorium. They hold anywhere from 20-40 events a year and invite artists from all over the world to give presentations and live demonstrations.