After relying on rentals for some time, Tennessee-based J&B Production Company wanted to add a dedicated video encoder to its permanent kit. The sought-after appliance had to be reliable enough to perform flawlessly during high-stakes productions and versatile enough to support in-person, virtual, and hybrid events of all sizes. The team found the perfect fit in Epiphan’s Pearl Nano.

The challenge: Searching for a dependable dedicated encoder

A packed calendar of hybrid and virtual events across the United States made one thing clear to the team at J&B Production Company: investing in a permanent hardware encoder, rather than continuing to rent, made a lot of sense.

Thus began J&B’s search for the perfect video encoder to pair with its production switcher. At the top of the company’s wishlist was a rare combination of small size and professional features – to facilitate transportation and to afford the team the flexibility to serve their diverse clientbase.

The search started with a misfire. When J&B tried a newer encoder offering from one company, the device failed within the first hour of pushing a stream to it.

Eager to secure an encoder in time for their upcoming dates, the team thought back to a source of past success – a rented Epiphan Pearl-2 video production system – and knew just where to look.

We stopped looking at other companies and looked harder into Epiphan’s product line for what product made sense. Ethan Johnson, President and Co-founder of J&B Production Company

Find the perfect fit for your productions

With its refined yet powerful feature set, Pearl Nano offers the ultimate blend of portability and versatility. It’s a perfect fit for small-scale live events, SRT contribution encoding, or as an add-on to a full production switcher.

The solution: Pearl Nano, the perfect-fit streamer and recorder

“We always had good luck in the past with Epiphan hardware,” Johnson continues. “Never had huge issues, which usually doesn’t happen. I can name you lots of audio consoles and switchers that have failed countless times in the 14 years I’ve been doing this.”

The decision came down to two Epiphan products: Pearl Nano or Pearl Mini. In the end, the team chose Pearl Nano for its refined yet versatile feature set and ultraportable package.

J&B purchased two Pearl Nano units, which have delivered the desired flexibility while helping to streamline production setup with:

Pearl Nano had everything we needed. It was easy to set up and easy to navigate on the webpage end. It fit the price for what we needed and what we were doing at the time. We haven’t rented another encoder since we bought them. Ethan Johnson, President and Co-founder of J&B Production Company

Pearl Nano’s cost-to-value ratio was also on the mark, adds Johnson. “In the grand scheme of things, the price is pretty small. It’s cheaper than an Apple computer, and you get a lot in a size you can carry with you. I don’t have to rack it or carry a case. You can put it in your backpack, and that’s pretty impressive for what it does.”

Another plus: the device is able to meet the often strict security requirements of J&B’s clients. This includes medical companies that must adhere to Health Insurance Portability and Accountability Act (HIPAA) regulations, and a major social media platform in Silicon Valley that must maintain a robust security posture.

Results: Rock-solid streaming and recording for every event

All told, Pearl Nano proved a perfect fit for J&B’s needs. “For what we invested to get the units, we’ve gotten twenty times more out of them than what we paid at least,” Johnson says. “For me it ticks everything. I really couldn’t ask for more.”

With its rugged chassis and reliable performance, Pearl Nano has brought the J&B team the reliability they needed in an encoder. “They’ve been thrown into many Pelicans and sent all over and we haven’t had an issue yet,” says Johnson.

Power over Ethernet Plus (PoE+) also showed its production-saving potential when, during a rehearsal, someone stepped on a unit and killed the power switch. Thanks to Pearl Nano’s PoE+ support, the system kept going.

The team also appreciates Pearl Nano’s versatile feature set. It lets them offer clients more options without adding cost – especially important for those trying to keep their overheads down by hosting virtual events.

Another favorite feature: Pearl Nano’s flexible storage. It’s a boon to be able to remove the SD card and transfer recent recordings to a laptop, Johnson says. “Whoever is free can start backing up stuff.”

Pearl Nano’s intuitive interface makes it easy to set up and stream. That’s a big plus over competing products, which the J&B team found clunky and slow.

Best way I can describe it, with a lot of other encoders it seems like you have to know how to code. It’s kind of like that older style of menu, where you have to know every little navigation to set it up right. Honestly, I could probably hand this to a tech who has been in the industry a year or less. As long as they know what an encoder does, they can set up a stream very quickly with Pearl. Ethan Johnson, President and Co-founder of J&B Production Company

Adding efficiency are time-saving features like the ability to set up multiple stream keys in Epiphan Cloud and apply them to devices as needed. The team appreciated this greatly for one client who required seven stream keys a day, Johnson adds.

J&B’s new video encoder hardware has also brought the team something you can’t put a price on: less stress. This is crucial when it comes to virtual events, which add the network layer as a major potential point of failure, says Johnson.

“Pearl Nano has saved me a lot of stress and a lot of worry. As soon as we got them and used them on a few events, I realized I don’t have to worry on the encoder side anymore. I trust it’s going to do its job, and I haven’t had one fail yet.” 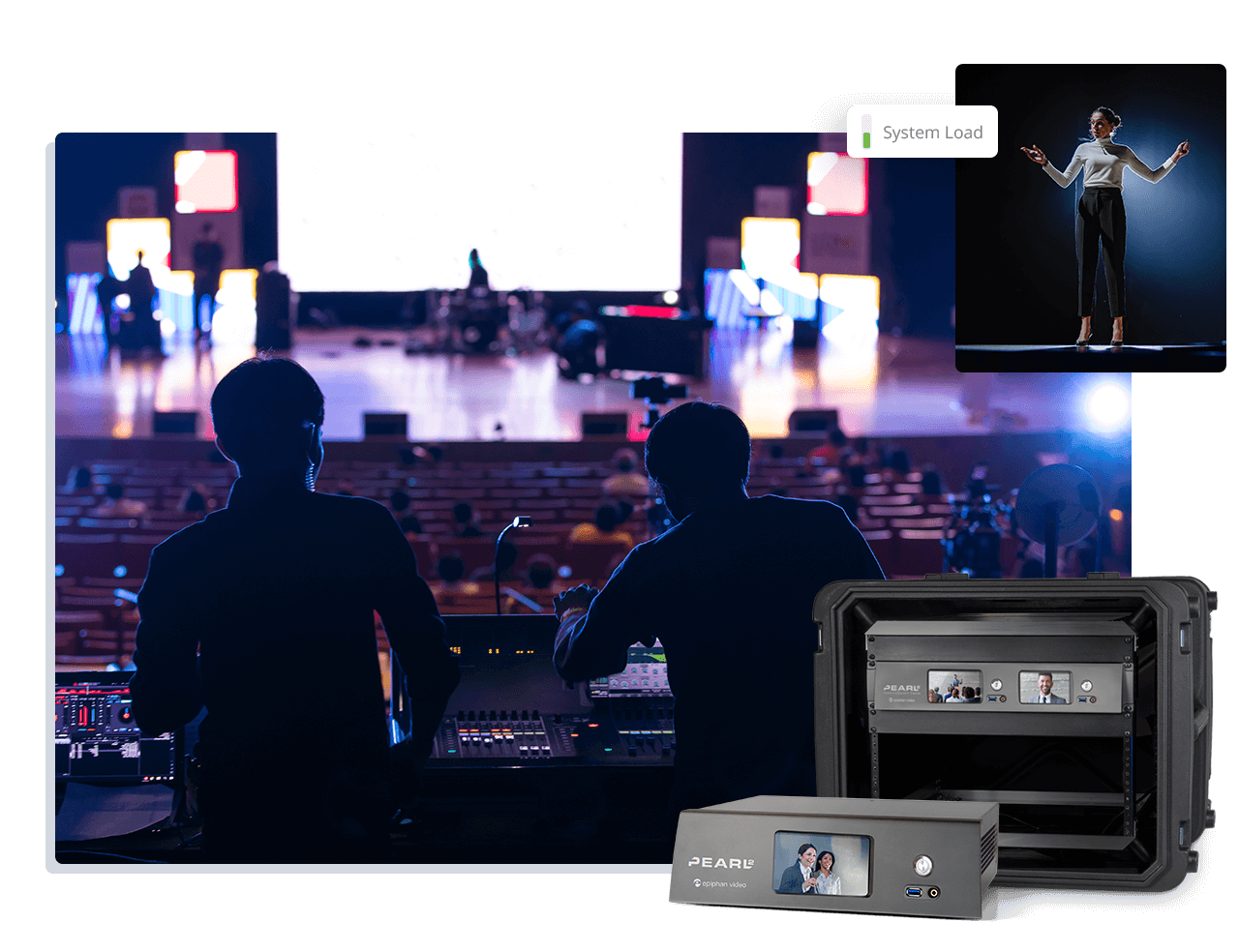 Solutions you can stake your reputation on

Founded in 2020 by two production veterans, J&B Production Company works with corporate, arts and entertainment, and non-profit clients across the United States. As a “start-to-finish partner,” the team takes care of everything from set design, drawings, and gear sourcing to event setup and live production.