Take advantage of drone technology and learn how to add captivating aerial footage to your next live production!

If you’re in the Pro AV space, or are familiar with streaming and recording live events, you’ve no doubt heard of drones. And if you’re curious about using drone technology in your next live production, you’ve come to the right place.

In this post I’ll cover the value drones bring to live events and then take you through two different live production setup using drones as video sources: one that’s simple and cost-effective, and a second that’s geared for live production at a more advanced level. 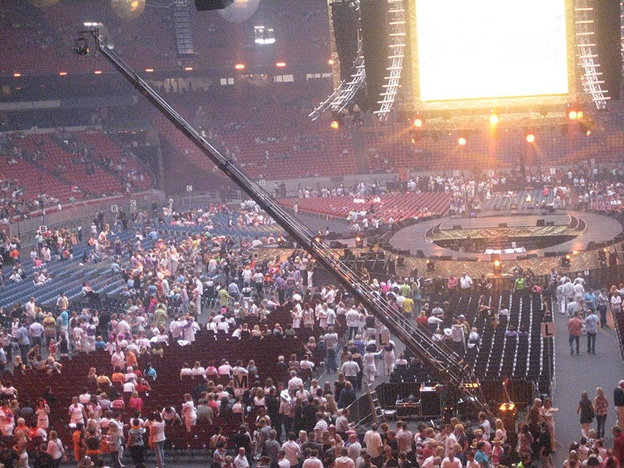 The death of the camera crane

Camera cranes have always been the most popular choice to capture overhead or steady motion video shots. Generally, due to the high cost and complexity of operation, the crane shot was reserved for big budget productions or movies.

A typical crane shot at a large event or concert is complex, costly and cumbersome. And until the video drone came along, there was no better option. Of course, smaller jib cranes exist, but they suffer from the same size and price limitations that are common to all types of camera cranes.

Drones (also known as quadcopters or multicopters) make the crane-style shot accessible to video productions of any size. To many live event productions, drones are an invaluable, versatile tool that allows event operators to captivate viewers with engaging and dynamic aerial footage.

With the advent of FPV (first person view) drones, the capability to downlink live video directly from the drone in real time allows the producer to view and control the shot in a similar way as with using a camera crane.

While the output of most FPV drones is viewed on a phone, tablet or other mobile screen, professional drones add an HDMI™ video output directly on the remote control. For some drones an HDMI output module can be purchased separately.

A typical live event has multiple video sources – like presentation slides, cameras and now… drones! But what’s the easiest and most cost-effective way to add captured drone footage to your live stream?

To find out, we did a little test. For our experiment, we used the relatively inexpensive Dromida Ominus FPV drone. At a retail price of under $200, this is one of the most affordable FPV drones available. 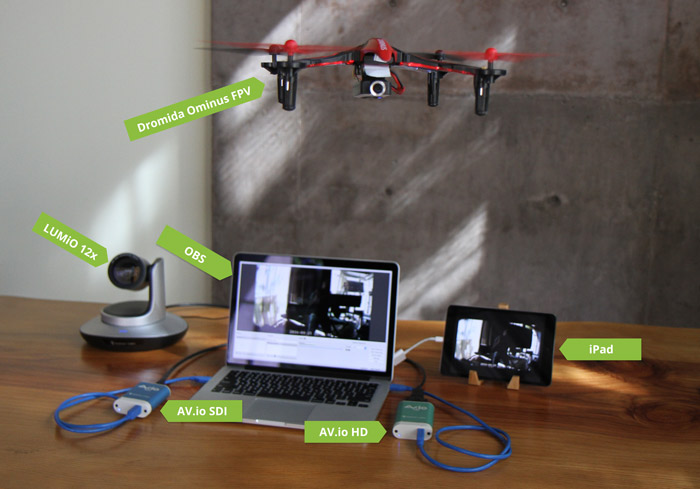 Here’s what we did to create a cost-effective live production using a drone as one of the input sources:

Taking it to the next level

Software-based solutions such as OBS and Wirecast are great for smaller, simpler productions, but what happens when you need to live stream a production with multiple cameras and switch between a variety of sources and layouts at high resolutions and frame rates? In this case, using an all-in-one live production mixer hardware, such as Pearl, is your best bet. 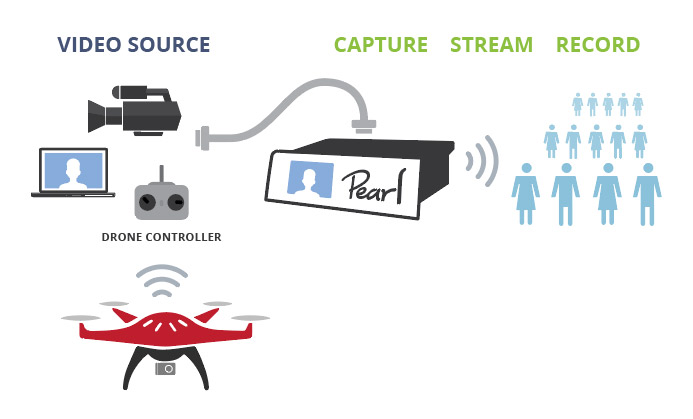 Many professional live production software tools share a few of the same fundamental features as Pearl, such as customized multi-source layouts and live switching.

Where will your drone take you?

We’ve seen our customers deploy our products to use drones as an extra camera shot in their webinars, conferences, and even live streaming and recording of concerts. We aren’t kidding when it comes to drones! No matter what drone you are planning to deploy in your next event, Epiphan’s video grabbers and live production hardware are there to help make your live production a smash hit.

Have you used a drone in your live production yet? If yes, how did it go? If not, tell us why!