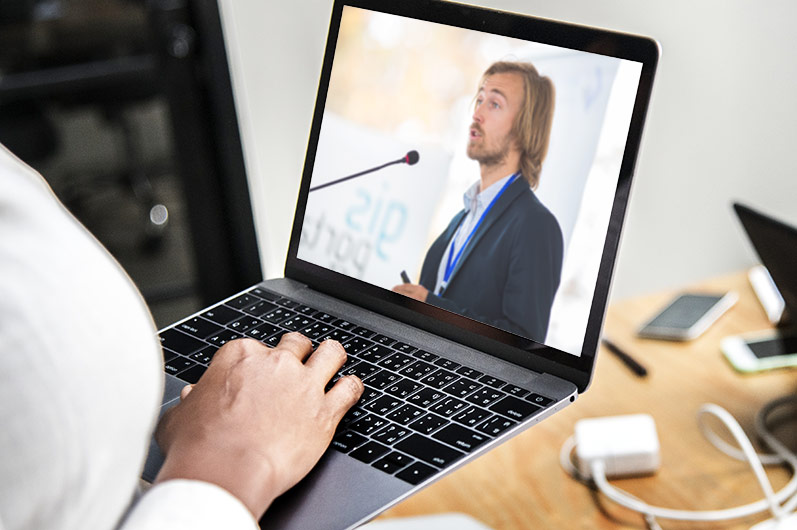 Imagine your company has plans to host a conference. No one has confirmed a venue, booked travel or rooms for guest speakers, arranged for catering – and the conference is tomorrow. Yet no one’s sweating any of it because none of that stuff matters when your conference is virtual.

This isn’t a fantasy dreamed up by a stressed-out event planner or conference organizer working with a modest budget and a mile-long wish list. Virtual conferences have been a thing for years, and the concept has inspired more than a few forward-thinking businesses.

Video technology company Kaltura saw the potential way back in 2012, when it hosted the first Kaltura Education Video Summit. Thousands virtually attended or downloaded a recording of the event, which included speeches by leaders in the education, learning, and training sectors. More recently, in April 2018, Drip hosted its second Au+oma+ed virtual conference, which featured a slate of 14 ecommerce experts and attracted more than 20,000 registrants. That same year in August, Wistia hosted CouchCon, a virtual event made up of a live keynote and pre-recorded speeches by marketing experts from LinkedIn, TechSmith, Buffer, and others. Nearly 1,700 attendees from around the world virtually sat in on CouchCon 2018.

Those are some impressive numbers – and none of the organizers had to lock down a venue big enough for all those people. Not one of the attendees had to travel anywhere, or even change out of their pajamas.

Why you should host a virtual conference

Should your company think about launching a virtual conference of its own? We think so. Here are five reasons why:

Virtual conferences tend to cost much less than in-person ones. That’s because going virtual does away with a lot of the expenses associated with traditional conferences. Venue rental fees alone run anywhere from $500 to $20,000. Add in fees for permits and licenses, catered meals, Wi-Fi access, travel and accommodations, signage and other physical collateral, and you’re looking at an enormous spend – and high ticket prices to make up for it.

None of that’s to say hosting a successful virtual conference is without expenses. Up front, your company will probably have to invest in (or rent) new technology, tools, and services to make it possible. But all that would still likely cost less than bringing everyone together under one roof. You’re also then set up to host more virtual conferences later. Plus, any gear you buy might come in handy for webinars and other live video work.

When your conference is virtual, attendance isn’t limited by the size of a venue or who can afford to make it out. That’s partly what’s behind the big numbers that Kaltura, Wistia, and Drip pulled with their events. People can tune in from anywhere in the world – at home, in the office, or on the go – and at any time, if the event is recorded and made available on demand.

You can charge people to download the video-on-demand (VOD) version or make it free to watch. Both options have their advantages. The free route can get even more eyes on your content because then viewers can spread it around online.

It’s also worth noting that going virtual won’t rule out one of the biggest selling points for a lot of conference attendees: networking. Platforms like ON24 and Zoom make it possible to set up virtual networking and breakout rooms for participants to use throughout the event. Some solutions even support virtual exhibit halls, where attendees can learn about products and services and chat with vendors.

3. Bring in experts from anywhere

It’s much easier to pitch your conference to potential guest speakers when they can contribute content conveniently from their home or office. Otherwise, speaking at a conference can be a tall order since it means making time to get there and be there.

There are a couple of ways you can treat the speeches at your virtual conference. You can live stream them like Drip did with its keynote. This may make sense for speakers who are part of your company or live nearby. But what a lot of companies do is have each speaker pre-record their talk with a tool like Windows Camera or QuickTime. Then it’s just a matter of reviewing and editing the content and casting it during the conference.

While speakers who can’t attend your virtual conference won’t be able to answer any questions after their presentations, your event still benefits from their perspective and expertise. Had they needed to physically be there, that same expertise might have been unavailable.

Virtual conferences offer many of the same opportunities to earn revenue as in-person ones – attendance fees, sponsorships, and so on. When it comes to a virtual conference, you can charge people to access the live stream, or to download the VOD version afterward. Alternatively, you can make it free to potentially draw a bigger crowd for upselling and lead generation.

During an event put on by the Genius Network in 2017, CEG Worldwide founder and CEO John Bowen shared just how profitable virtual conferences can be based on his experience throwing three separate ones. With very little marketing, 10% of the 2,600 who showed up bought packages worth $100. The events collectively brought in $500,000 for Bowen’s firm, and helped sell coaching programs and attract investors. Results like these are enough to make any business take note.

Virtual conference platforms can often tell you a lot about conference-goers: which sessions they attended and for how long, which booths they interacted with in the virtual exhibition hall, and more. This kind of insight is invaluable for developing targeted content and for making your next virtual conference even more successful. Asking registrants to opt-in to email blasts or requiring an email to access the VOD version can also be effective for lead generation.

What you’ll need to do it

Say you’re sold on the concept of virtual conferences. What would your business need to pull one off?

Decide on an overall theme for your conference that will resonate with your audience. If you don’t know enough about your audience to come up with one, launching a conference might be premature. Once you’ve landed on a compelling theme, start hunting for guest speakers who are authorities on some aspect of it. Your business networks and social platforms like Twitter and LinkedIn are good places to start.

Above all, you want your conference content to be dynamic and engaging enough to grab your audience and hold their interest. The same principles for planning a webinar apply here.

You could have the most captivating conference agenda on the planet, but no one will show if you don’t get the word out. Use what tools you do have to your advantage – the company website, mailing lists, social media pages, etc. – and consider adding new ones to your arsenal. Craft targeted ads for Facebook or Google. Build a website or microsite that presents the theme, conference agenda, speaker bios, and other information to generate interest. Shoot and share a short video that gives people an idea of what they’re in for if they attend.

There are a lot of different tools that can support a virtual conference – whether it’s a webinar application like ON24, a purpose-built solution like vConferenceOnline, video conferencing software like Zoom, or a private content delivery network (CDN) such as Livestream. Take your pick based on what will support your overall conference plan. For example, if you’d like to charge a fee for access, make sure whatever platform you use includes a paywall or monetization system.

Event registrants often like to be reminded that the date is coming up. It’s also a good marketing move to communicate with registrants afterward – to share a link to the VOD version (free or otherwise), to remind of a product or service showcased during the conference, etc. You’ll want a service like ActiveCampaign, ConverKit, or Campaign Monitor to automate these communications.

A virtual conference with high production value will reflect well on your company and keep people engaged. Viewers aren’t likely to stick around if your video and audio quality are poor. Ensure you have the right tech to give your conference a professional feel. That means a high-quality camera, a good microphone, proper lighting, and a great looking set. You can buy or rent this gear and set it up yourself, or call in an AV production company to do it all for you.

If you really want to wow virtual conference-goers, you can take it even further with a multi-camera shoot along with custom, picture-in-picture layouts, and other advanced features. This kind of setup would require additional gear such as a video switcher, streamer, and scaler. Our Pearl video encoders, the Pearl Mini and Pearl-2, include all of these in a single appliance along with multiple video and professional audio inputs. Pearls also feature a unique, built-in touchscreen for live switching, confidence monitoring, custom layout selection, and more.

Make your virtual conference something to behold

Learn more about how our video encoders and other products can support your virtual conferencing ambitions. If you have any questions, ask one of our product specialists. They’ll be happy to help!

Michael is a writer for Epiphan Video.

Michael Monette
Get blog goodness right to your inbox!
Go to Top