Capture up to 60 frames per second of video.

Go beyond sharing your desktop or webcam, frame grabbers let you capture video on your computer from nearly any source including HD video cameras. So easy to use, there are just two steps to get up and running. 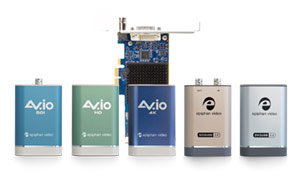 What is a frame grabber?

Frame grabbers (also called video grabbers or capture cards) are small portable devices or cards which capture video* from nearly any source. Once captured, you can record that video to your computer, stream it using Skype, Webex or other software and use it to build production videos for your organization.

What can I capture?

Frame grabbers will grab video from nearly any type of port including HDMI™, SDI, DVI or VGA.  Devices you can capture could include high definition cameras, laptops, cell phones, ultrasound machines, electronic microscopes and much more.

How do Epiphan frame grabbers work?

Connect your device
to the frame grabber

Connect your frame grabber
to the laptop

When would I use a frame grabber?

Which model is for you?