Palo Alto, CA, September 29, 2020 – Epiphan’s Pearl family of hardware encoders is growing with the upcoming release of Pearl Nano, a versatile single-channel encoder that offers a refined yet powerful feature set in a compact form factor.

“With Pearl Nano, we wanted to give customers a better fit for applications where you don’t need that all-in-one system like a Pearl-2 or Pearl Mini,” says David Kirk, Epiphan’s marketing VP. “Not every event requires many inputs or channels, and then there’s contribution encoding where you really only need one camera and a microphone.”

Nano boasts several features that are uncommon or unseen in other single-channel encoders. A screen built into the device’s front allows for basic configuration and control as well as confidence monitoring during streaming and recording. Rear inputs include HDMI and SDI video, two line-level XLR ports for professional audio, an HDMI program out, and an HDMI pass-through for zero-latency content display on in-room monitors. To further streamline setup, Nano also supports Power over Ethernet Plus (PoE+) in addition to DC power.

Also unique to Nano is the powerful custom layout builder. This lets users tailor their video program with a single-source or picture-in-picture layout that can include a dynamic background, graphics, text overlays, and other elements.

“We looked at the gaps in the market and let that inform Nano’s development,” says Epiphan product manager Greg Quirk. “You see that in the front screen for confidence monitoring and control, the HDMI pass-through and built-in professional audio inputs, and the modern streaming standards Nano supports.”

SRT encoding and decoding will prove a major application for Nano, Quirk adds. “Nano is a great solution for remote contribution since it’s small and light for shipping and also straightforward for non-technical users to connect their sources and start a stream.”

Adding to Nano’s SRT capabilities is remote accessibility through the Web-based user interface and Epiphan Cloud, a centralized platform for configuration and monitoring of Epiphan devices. This enables producers to remotely manage and control Pearl systems located anywhere in the world, reducing the likelihood of configuration errors and making for an easier production overall.

Like Pearl-2 and Pearl Mini, Nano includes advanced security features like LDAP, 802.1x, and SSL, as well as deep integration with video platforms Kaltura and Panopto, which makes it possible for users to start and stop events right from the front screen. And a first for a Pearl system: an expansion bay lets users install an M.2 SSD for additional local storage. Nano can also store recordings on an SD card inserted into the system’s SD card slot, as well as connected USB or network-attached storage devices.

For more about Pearl Nano and its capabilities, visit epiphan.com/products/pearl-nano. 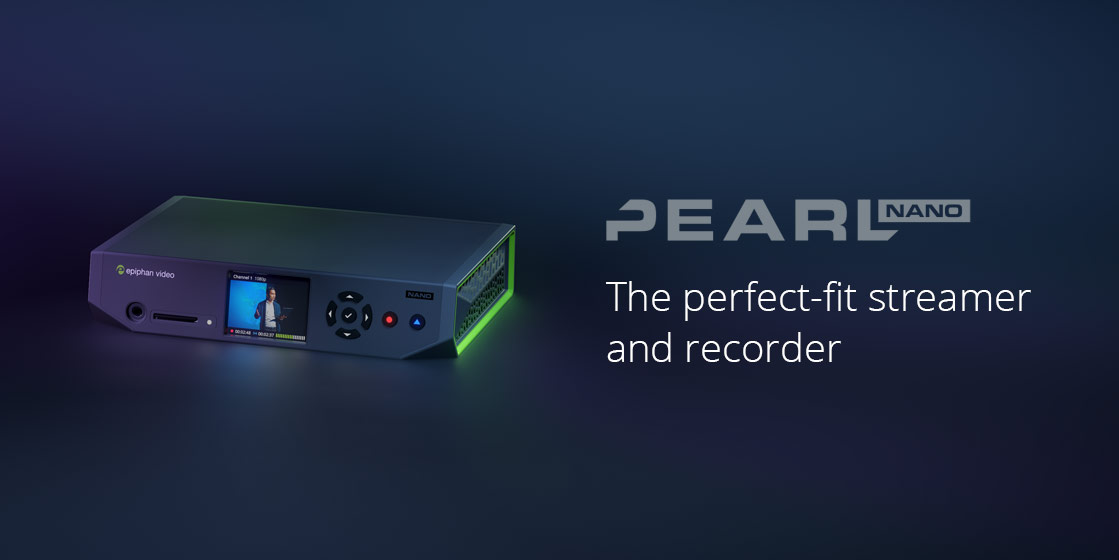 Epiphan Pearl-2 and Pearl Mini video production systems are reliable, versatile, and easy to use. They’re the only hardware encoders with a built-in touch screen for live confidence monitoring, switching, and more. The newest member of the Pearl family, Pearl Nano, is a compact streamer and recorder with a refined feature set that includes SRT encoding and decoding. Epiphan LiveScrypt is a dedicated automatic transcription device powered by advanced speech recognition technology. Leveraging LiveScrypt, organizations can make their live events more accessible and engaging with automatic, accurate, and affordable real-time transcription. Epiphan also offers a complete suite of portable, USB-based frame grabbers, enabling users to capture signals from just about any video source.