We’ve put AV.io HD in lecture rooms to record courses. With some teachers computers ( mainly Macbooks, but some PCs) the image appears faded and greenish.
We see this with VGA splitters or with direct VGA cable connected on Epiphan AV.io HD, and on different capture devices…
My Macbook air 13" also shows the symptom, some some of my colleagues Macbook pro do not.
Hooking them to a VGA display doesn’t show this nor does de data projectors in lecture rooms.

I would recommend testing different VGA cables or VGA adapters from your video sources. It’s possible that it could be faulty cabling or bad adapters being used with the AV.io HD.

If the Mac computers being utilize require adapters for VGA, DVI or HDMI I would recommend utilizing DVI or HDMI as they typically will provide better fidelity in the quality of signal. If the issues persists after trying different cables and adapters it’s possible we could be looking at a more hardware-related issue with the AV.io and you would recommend to contact info@epiphan.com to reach the support team for extensive testing and possibly needing file an RMA

I’m having a similar problem.
My AV.io HD is connected directly to the VGA output, using the supplied cable, and the captured image’s color are distorted.
I’m using the latest firmware and didn’t change any settings in the capture software.

Attached the captured RGB color calibration image.
The original image is in the link below as you don’t allow attached more than one image…
“http://www.jeffreysward.com/image/tp02aw600.gif”

As you can see some details are completely gone. 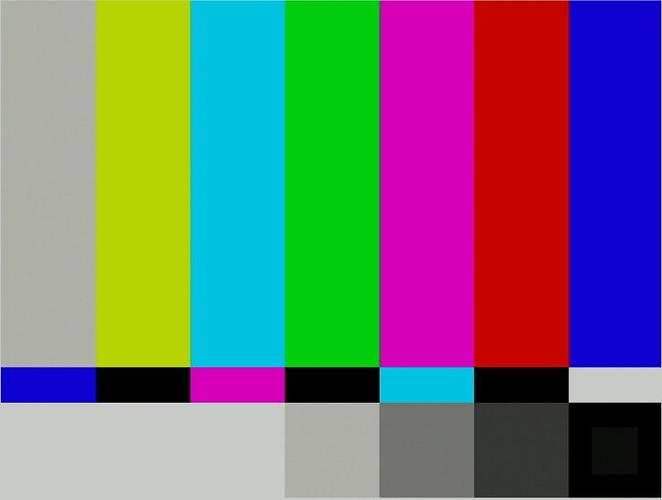 There are a few potential things happening here:

-VGA is an analog signal, so there is some room for interpretation of the incoming signal, this can cause inaccuracies in the captured image, especially when it comes to brightness and contrast. You can make brightness / contrast adjustments in any application that supports making UVC adjustments. (as a note this doesn’t happen with HDMI or DVI signals as they are digital, if you can use HDMI or DVI please do so as this is a superior signal!)

-There is a colorspace conversion that happens within the AV.io HD from RGB24 to YUV2, this causes some amount of color information to be lost. Though this should be visually lossless and this compression would happen anyways when recording / streaming / conferencing / etc. But this could compound with the above potential issue perhaps

I don’t have an option to use HDMI or DVI as the device has only VGA output.
I tried changing the settings (I’m using Cheese on Ubuntu) but the details are simply not there.
As you can see in the attached image, the three bottom-left rectangles are the same, unlike the reference image.
I can cope with some discoloring but this loss of data from a relatively expensive grabber is very disappointing.
What can be done to fix this?

Hmm, I would also recommend testing with a different capture computer and different software to see if the issue continues to persist. Also, what is the VGA source you are capturing from?

Hello,
I’m using a AV.io HD unit for a device outputting a VGA signal of 1024x768 @60fps. I’m using the supplied usb and VGA cables and tested in various locations. Original firmware.
I notice a significant color distortion with some color differences disappearing completely, also the brightness seems too high… – is something wrong with my capture unit or is there some setting anything I can do to prevent the issue?
The device only has a VGA output. There is no issue when connecting a VGA monitor or VGA projector til the same source…
Thanks
Ulrik

Analog video signals sometimes require being adjusted manually. With the AV.io HD, any webcam-type application would also have options for adjustments such as brightness and contrast. This would resolve the brightness issue at the very least.

I would also highly recommend updating to the most current firmware as each firmware release provides fixes for bugs that may have been found in previous firmware versions. The firmware fix and manual adjustments may resolve the issues completely.
However, if the issue does appear to persist, please test with a different video source and VGA to DVI cable to see if the issue is reproduced or if it disappears. If the issue disappears then it may indicate an issue with the cable or the output from the intended video source itself.