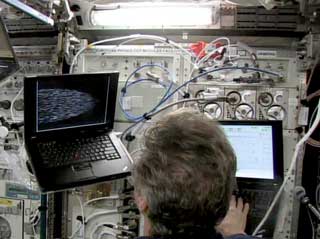 During the first week of June 2015, Epiphan’s KVM2USB was used for the Plasma Kristall-4 commission experiment. This photo shows space station crew supporting the science team on ground conducting experiments; the particle cloud can be seen on the laptop to the left. Image: ESA/NASA

PK-4 is a scientific laboratory aboard the ISS run by the ESA as part of their human spaceflight research experiments. Its objectives are to study transport properties, thermodynamics, kinetics, and statistical physics of complex plasmas.

During operation, scientists on Earth select parameters (pressure, gas flow, plasma voltage, etc.) and initialize the experiment. The resulting particle cloud must be captured by a camera aboard the ISS. Time delays involved in sending and receiving live signals from the ISS make it very difficult for ground-command to accurately capture images of the cloud, so it was necessary to find a way to have the on-orbit crew member perform this task. There are anticipated to be a total of 15 PK-4 science missions until 2020.

Epiphan’s KVM2USB allows the on-orbit crew visualize the live VGA video stream aboard, see the particle cloud and interact with it. The KVM2USB also offers the ability to do support and maintenance on the recording computer system by emulating a keyboard, mouse, and monitor on a laptop computer. 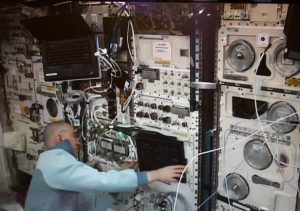 The KVM2USB was transported to the ISS aboard the Progress 57P rocket on October 29, 2014 from Baikonur, Kazakhstan. In order to accept the KVM2USB into the payload, the KVM2USB underwent stringent testing for a multitude of factors including reliability, power consumption and temperature. The off-the-shelf retail KVM2USB passed these tests with excellence and was successfully used for PK-4 system activation in orbit on December 8, 2014.

In addition to the June 15, 2015 Plasma Kristall-4 commission experiment (pictured above-right), the KVM2USB was again put to extensive use on the third PK-4 mission from October 10–13, 2016. In this campaign, ISS Commander Anatoli Ivanishin (pictured left) used the KVM2USB to help capture large quantities of particle clouds for study by theon-ground scientific community. Roughly four months later, the KVM2USB was used again on-board the ISS in support of the fourth PK-4 mission on February 13, 2017. 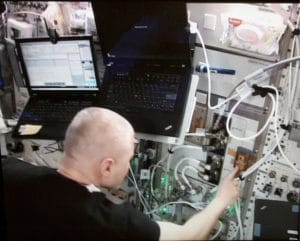 Cosmonaut Oleg Novitsky about to connect KVM2USB to a laptop running Epiphan imaging software during the fourth PK-4 mission on February 13, 2017. Image: ESA/NASA

Between PK-4 missions, the laptop connected to the KVM2USB is often used to assist other payloads. The KVM2USB remains securely installed on the ISS during these periods.

Epiphan Video continues to work closely with organizations such as NASA and ESA by providing equipment with unrivaled reliability and a proven record of accomplishment both on earth and in space.

Additional information on the PK-4 research experiments can be found here:

Epiphan Pearl-2 and Pearl Mini video production systems are reliable, versatile, and easy to use. They’re the only hardware encoders with a built-in touch screen for live confidence monitoring, switching, and more. The newest member of the Pearl family, Pearl Nano, is a compact streamer and recorder with a refined feature set that includes SRT encoding and decoding. Epiphan LiveScrypt is a dedicated automatic transcription device powered by advanced speech recognition technology. Leveraging LiveScrypt, organizations can make their live events more accessible and engaging with automatic, accurate, and affordable real-time transcription. Epiphan also offers a complete suite of portable, USB-based frame grabbers, enabling users to capture signals from just about any video source.

Back to all press releases
Media coverage

Media coverage
Where to Buy?

Buy Epiphan products from our partners or from our online store.