I’m using the AV.io HD to record VGA footage off an old SEGA Dreamcast.
The VGA cable for the Dreamcast outputs at 640x480p in 60FPS, however the game I’m recording only runs at 30.

Since the game is running at 30, logically every two frames there should be movement in a 60 video. I was noticing stuttering on my playbacks and did some testing to notice that the frames were either being held too long, too short, or missing completely. I did more testing closely watching my task manager, I was still getting the frame drops even though my CPU wasn’t under max load. I’ve been capturing with OBS on Windows 7, but I also did a test on Linux and had the exact same result.

I don’t feel images can really explain it that well, so I put together a minute video showcasing the issue:

I have tried both CPU and GPU encoding, a different capture software, swapping VGA ports on the splitter, plugging the cable directly into the card, even swapping USB ports, nothing has worked. The problem appears to be with the processing on the card itself.

I did do another test with a 60FPS DC game and found I was having the exact same issue. This is my only VGA source to test with, so I’m unable to see if it’s just a VGA problem with the card or VGA with the Dreamcast specifically.
I did get a VGA to HDMI converter to use in the setup originally. It doesn’t have the frame rate problems, but is unusable due to the card spazzing frames at random (pushing them to the side of the screen, smushing a copy of the current frame to the top of the screen, etc.) and the flashing with that is horrible. HDMI video is fine with other consoles, nice and smooth, the frame rate issue is only with VGA.

I really would like to have a consistent frame rate for the sake of video quality, so if anyone knows of some settings I could tweak to get it to work, it would be most appreciated.

To start with can you run the config tool? https://www.epiphan.com/downloads/avio/EpiphanCaptureConfig-r40343-20171227.zip

This will at the bottom show what the incoming signal is. We can this way make sure that this is indeed coming in at 60fps.

Also, if you don’t have any VGA/DVI/HDMI cable connected to the AV.io HD and then plug it into the computer via USB 3. What colors come up on the LED? First it should be red to indicate power then it will go to either green or blue to indicate USB 2 or 3 mode. Can you confirm that this is blue for USB 3 mode? 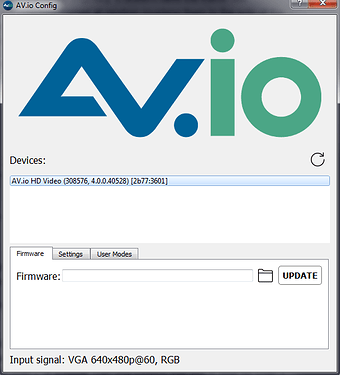 That’s how it comes up. I’ve tried a few settings in the config tool, such as using the incoming signal resolution and that hasn’t solved this problem.

Yes, the light does come up as blue for the USB 3 when there are no plugs connected.

Ok, that confirms the signal is indeed 480p60 and the AV.io HD is operating in USB 3 mode.

USB bandwidth is very important to stable framerates here, do you have any other USB devices connected to the computer? If this is a laptop are you using the built in webcam while capturing from the AV.io HD? Is the AV.io HD connected directly to the laptop with the included USB cable, or is there a dock, hub, extender, etc in between?

I’m using a desktop, but the only devices I have plugged in during the recording are my keyboard, mouse and USB mic. The fastest USB port I have is sadly the 3.0 (or 3.2 gen 1, I think is what they renamed it?). I was able to test it on my brother’s laptop which runs Linux, nothing but the card plugged in, and the problem still persisted. Oddly enough it wasn’t any worse considering the laptop only has USB 2.0.

It is a powered splitter. There’s no extension cables. The Dreamcast VGA cable is 5ft, which goes into the splitter, then the VGA to DVI-I (dual link) cable is also 5ft (shortest I could get) then it’s just the included 3ft USB cable from the card to the tower. I did use a VGA to DVI-A (single link) small block adapter to plug the Dreamcast directly into the card without the added cable length, that didn’t help. I don’t have the original VGA to DVI cable that came with the card, which is why I’ve been using this block and bought the new cable to make sure that wasn’t the issue.

Hmm, ok, all that sounds good. We don’t normally see issues like this, and you mention that HDMI capture is good? I worry that there might be some signal irregularity from the Dreamcast VGA adapter there causing an issue. Did you try capturing directly without the splitter in between to see if this makes a difference?

HDMI is perfectly fine. My original setup plan was to use a VGA to HDMI adapter, but the card took some issues with that. Here’s pictures of that:


https://i.imgur.com/YLqsSGu.png(image larger than 4096KB)
Mostly happened during movement, but would flash bad like this for a couple of frames and go back to normal. I did review that footage however, and the frame rate was completely normal.

Yes, no difference.
I hadn’t really thought that it might be the Dreamcast cable. It’s not an adapter, the Dreamcast natively supports VGA, however the only cables you can get now are third party ones. I would assume though if there was signal irregularity, the same issues would be appearing on my monitor and not just the card?

Hmm, unfortunately the VGA signal working properly on a monitor doesn’t mean that the signal is entirely within VGA spec.

You mention a Dreamcast to HDMI adapter, as far as compatibility with the DVI2USB 3.0 there wouldn’t be an issue. We can capture just about any resolution here, so 640x480 at 60HZ is perfectly supported over HDMI.

Okay, thank you very much for your time! I wouldn’t have thought of that on my own, I’ll give it a shot!

It’s been a bit, but I tried tons of different equipment. I bought a high quality VGA box, but that still lead to problems. I figured it’s just not possible to get good quality VGA equipment nowadays, so I got another VGA box but the output is in HDMI. It’s a great box and very popular with fans, many people use it in recording setups, still getting frame rate issues.
The card is treating it much like it treated the VGA to HDMI converter with doing this: 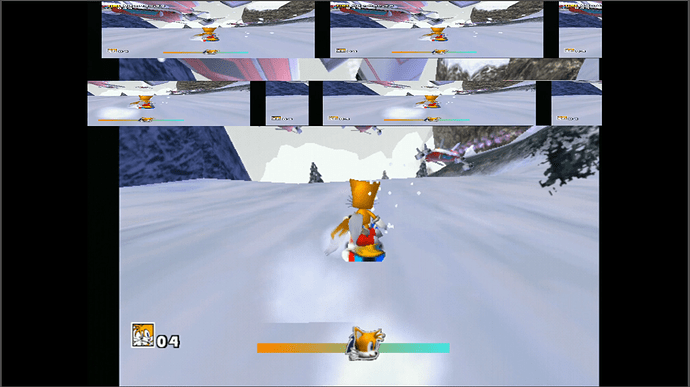 FBkfjlC.png1186×666 604 KB
I have however, confirmed it is indeed the capture card. I got an HDMI adapter for my old Wii (so I could record Gamecube games) and did a small recording test. It was a 720x480i signal, frame drops everywhere and indeed, the same odd image duplication. 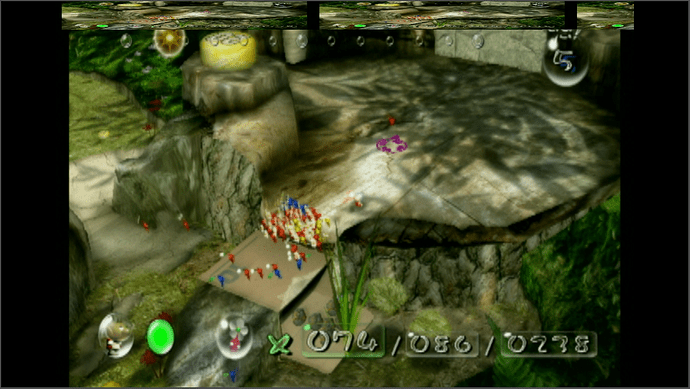 AytGOAa.png1184×668 878 KB
Recording off my Wii U and Switch (which are full 1080p HDMI outputs) with the exact same setups leave no issues, however the lower resolutions have these problems. I’ve even gone in OBS and forced the input resolution of the card to 640x480 and that hasn’t done anything. The only possible thing I can think of is to try and put an upscaler between the card and console, however I don’t own one and they get a little pricey.
Do you have any ideas or thoughts on why this might be going on? Do the lower resolutions not output a high enough voltage or frequency for the card? If so, what does the card need?
AdamFrame 2019-07-19 16:03:17 UTC #12

The only thing I can think of is if the pixel clock of the HDMI input falls below 25 MHz which would make the input signal outside of the HDMI spec and not compatible with the AV.io HD. I have tested with signals under 25 MHz and they do show distorted images, though not quite like what you are seeing there. If the issue is indeed due to the low pixel clock, then an upscaler should certainly resolve the issue. Unfortunately I don’t have either a Gamecube or Dreamcast or these HDMI adapters for them in order to test this here myself. Have you found any other sources showing issues? You mention that the Wii U and Switch work, so I assume a computer’s output also is working properly?

Computer looks fine. I’ve actually run out of sources to test, I didn’t even get that Wii to HDMI plug until a few weeks ago.
I’ll do my best to find a good upscaler and get back to you with the results.

Sorry I don’t have more to offer at the moment. Let me know how the upscaler works or if you happen to find anything else showing an issue that I might be able to recreate here.

And of course as this is in a public forum, if anyone else finds a similar issue they can let us know here too!

I’ve done a few tests and while I haven’t gone into full detail of it to see if it truly works, here’s what I found:
The upscaler works…kinda. The card won’t recognize the output from it as a video signal. But, I plug the upscaler into a splitter and then the card, it appears to have no issues. Only complaint is an HDMI doesn’t have as nice colors as VGA, but that’s something I can mess with in editing. I noticed a few instances of frame drops, but with how specific they were, I believe they were the fault of the Dreamcast. Still more testing needs to be done to confirm this though, but it looks promising. The card also has that weird tearing/artifact thing that it does when recording off the Switch, but I know that was fixed in the firmware update that’s coming.
It works, I won’t really complain, but my question still is why the VGA didn’t work. I understand the signal being weird when working with HDMI, but VGA doesn’t need the kind of power that a digital signal needs and in theory, my original setup should have worked fine. I know VGA isn’t common these days and I probably won’t ever need to record from VGA again, although I’m still troubled as to why it had these problems.

For why the VGA didn’t work, I cannot be sure in this case. VGA does work on the AV.io of course, but perhaps the signals from these devices are incompatible in some way. It could again be due to too low of a pixel clock, or perhaps it is outside of the VGA spec in some other way.

For the Switch HDMI compatibility, if you would like to try using the Beta firmware please email us at info@epiphan.com and we can provide you with a link

Thanks, I’ll do that!