You are here:
Epiphan News 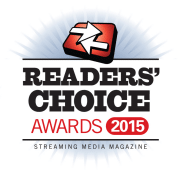 Streaming Media Magazine is having its 9th annual Readers Choice Awards, and at Epiphan Video we’re thrilled to learn that we’ve been nominated in four different product categories!

Awesome news, right? Certainly! But we can’t win without your support. Read on to learn how you can help make sure that we come out on top!

In what categories are we nominated, you ask?

Our portable and simple-to-use video grabber, AV.io HD, is nominated for

And our live production mixer, Pearl, is nominated in three distinct categories of its own:

What do we get if we win?

Winners will be announced at the upcoming Streaming Media West tradeshow on November 18, 2015 in Huntington Beach, California. (We’ll definitely be there, so make sure to drop by the Epiphan booth to say Hi if you’ll be attending!)

How you can help

If you’re interested in lending a helping hand, all you have to do is cast your vote for Pearl and AV.io HD at the following web link:

Voting is now open! Tell your friends and colleagues, get your votes in, and let’s make sure that Epiphan Video comes out on top!

A big ‘thank you’ to everyone who votes…. Wish us luck!