Ping Pong! An inside look at the lighter side of Epiphan

You are here:
Epiphan News

At Epiphan Video, we work hard – but we also make sure to play hard too.

Such is the case when Epiphan employees excitedly crowded into the games room, each looking to grab a paddle with hopes of besting their colleagues at the classic game of table tennis for our second-annual (mostly) company-wide tournament.

The ultimate prize? A small trophy and a shot of vodka. And believe me, people were fighting hard for every last drop of that delicious Grey Goose.

The atmosphere was thick with excited energy when the games began. There was pizza too – lots and lots of delicious pizza. I stuffed a couple of slices into my mouth 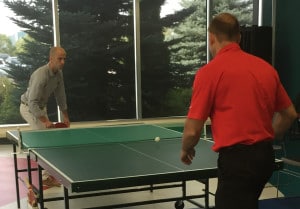 and shuffled over to one of the tables to begin my match with my first opponent, our Supply Chain Manager, Kerry.

Now, having never played a serious game of ping pong in my life, in my naiveté I imagined it as a casual game of back-and-forth between friends. Like lawn darts or a snooty game of badminton at a wealthy garden party.

Boy, was I wrong about that.

Kerry was relentless. White balls flew past my end of the table with lightning speed and the game ended in a blur. I lost miserably, having only achieved a single point to my name.

I then faced-off with fellow tech writer, Brigitte. We were both at roughly equal skill levels and played our match at a comfortable pace, tucked away at the table in the back of the room away from prying eyes. I actually managed to win too! Barely – but a win’s a win, right? My confidence in the game was beginning to grow!

The next game came and my fledgling confidence was immediately obliterated.

Oleg didn’t hold back in the slightest. He relentlessly peppered me with hardballs and inexplicably added various backspins, topspins, and sidespins to all of his shots, effectively eliminating me from the competition in the swiftest (and showiest) of fashions. From his perspective, it was like taking candy from a baby. Or, a better analogy in this case: taking candy from a baby then flipping the carriage over into the dirt.

I crawled out from under said carriage and dejectedly returned to the pizza feeding area, where I drowned my sorrows in cheese. 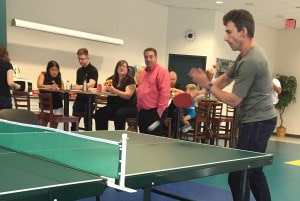 As I munched away, I observed with interest the pure ferocity with which many of my colleagues continued to compete. Teeth were clenched and muscles tense. People were jumping, diving, and stretching to their limit. Balls were catapulted halfway across the room and I’m pretty sure I even saw someone use a two-handed swing, to drive their pong ball with such force that it practically broke the sound barrier.

Frankly it’s a miracle that the paddles themselves didn’t take flight and that pong balls didn’t take out any eyes.

It’s almost like the game of table tennis does something to certain people. Once that racket gets in their hand they become a completely different person – a ravenous, frothing-at-the-mouth ping pong barbarian focused only on crushing the competition.

But seriously, people were indeed giving it their best effort. We have some incredible pong players here at Epiphan, and some not-so-good players (*cough cough*…), but in the end, that’s not what is important.

Through all the competition and sweat, what I noticed most of all was that everyone was smiling. It was a great afternoon of fun and a valuable opportunity to continue to build comradery and strengthen our bonds as a team.

Bring on the next tournament! But first, I need to get practicing…