Pearl is now a live video mixer and other news from firmware 3.15.1

You are here:
Products

June is shaping up to be an exciting time to work at Epiphan.

Not only have we recently announced our new trade name, Epiphan Video, and released a new UVC-based video grabber (AV.io HD), we’re also releasing a major update, firmware 3.15.1 for Pearl. With this firmware, Pearl is now a live video switcher.

The best part about this new release: it’s free for existing Pearl customers! I think it’s pretty fantastic that they were able to design this feature to work with existing systems and let everyone upgrade for free.

It’s been amazing watching this new feature come together. From early discussions about how this would work, to UI prototypes right to the final working product, it’s been lots of fun to see Pearl evolve. Take a look at Pearl’s touch screen shown here in the switching view. On the right is the currently streaming source or layout, on the left is the one the user wants to apply, and in the scroll bar across the bottom are all the custom layouts, pre-created by the user. 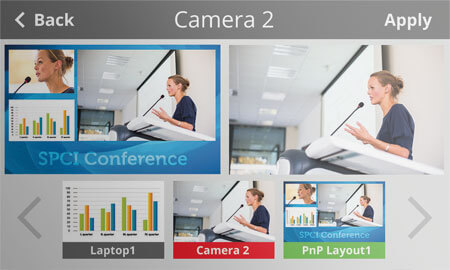 We like to listen to our customers, and one thing they’ve been wishing for is a way to be confident about the audio in their live streams and video recordings. As a result, we’ve also created a hardware refresh for Pearl that adds a 3.5 mm audio jack for headphones.

I was lucky enough to get to take a few photos of the very first new Pearl off the production line. Here is one of my favourite shots from that photo shoot:

While the team is off showing this at InfoComm 2015, I’ve been busy at headquarters working on an online version of our Pearl user guide and a new video produced and mixed 100% with Pearl. Take a look – I know you’ll be as impressed as we are with Pearl’s new firmware 3.15.1 release!