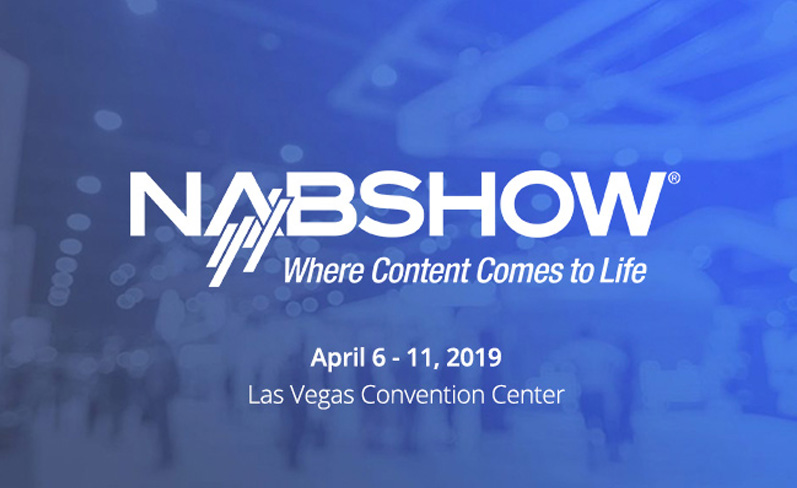 Epiphan Video has recently attended at the NAB Show 2019 in Las Vegas.

Last week we were surrounded by massive amounts of great people from the broadcast industry, amazing products, and exciting new releases. We scoured the ginormous floor(s) of the exhibition pavilions to bring you the most interesting news in the world of live video.

There was a lot to see and the choice was very difficult, but here are the top 10 coolest things we saw at NAB Show 2019.

Sharp surprised everyone with a working prototype of a Micro Four Thirds 8K mirrorless camera. The company understands that with more 8K TVs entering the consumer market, more 8K content will need to be created. This is exactly why they wanted to jump on the idea of an 8K camera this early in the game. When designing this product, Sharp strived to combine specs that will result in top performance, but also keep the price within reason. Here are some of the working features: 8K at 30fps recording, a huge rotating 5” touchscreen display, mini XLR and 3.5mm audio input, and mini HDMI out.

Sharp announced that the final model will be able to record Full HD, 2K, 4K at up to 60p and 8K at 30p (Long GOP, 8 Bit, 4:2:0, 200Mbps wrapped in an mp4 container) internally to an SD card, supporting both H.264 and H.265 compression. It will also have a clean HDMI out, which means the camera should be well suited for live streaming! Sharp promises to have a ready-to-ship version available by the end of the year at a price point of around $4000. While for the moment this price point may be geared more towards the pro market, the company is hoping that in the future they will be able to bring the price down to be easily affordable for consumers.

Network Device Interface or NDI is a royalty-free software standard developed by NewTek that gives you the ability to transmit and receive broadcast-quality video with very low latency over Gigabit Ethernet networks. This means that you can receive video from any camera on the same network, as well as output NDI video signal to conferencing apps like Zoom and Skype in real time. NewTek reseased NDI back in 2015, but it seems to be really taking off just now. At this year’s NAB, NewTek organized a special pavilion where 16 leading NDI developers showed off their work (including NewBlue FX, whose products we use for our live show titles).

The latest NDI version 4.0, unveiled at NAB Show 2019, is capable of native synchronized recording, has HDR 16-bit support, and already works with Adobe CC. It boasts “new capabilities that make video production over IP faster and more efficient, merging the fields of live video and post production.” And in just a few short weeks, NDI will become available on Pearl-2 with the 4.8 firmware release. Stay tuned!

Nikon’s booth was constantly swarming with people. Traditionally known for their photo cameras, Nikon is making a statement that they are more committed than ever to professional video production and content creators. To back this up, Nikon has recently released the Z 6 and Z 7 full frame cinematic mirrorless cameras. The Nikon Z 7 is capable of In addition to being capable of 4K ProRes RAW recording in 10 bit color, the Z 7 has a very ergonomic design as well as an incredibly pleasing newly introduced electronic viewfinder.

To further underline their commitment to video, Nikon partnered with Atomos to produce the Filmmaker’s Kit, which includes the Nikon Z 6 camera, along with an Atomos Ninja V 4K recording monitor, a gimbal stabilizer, Rode VideoMic, and lots of other great gear. The Kit is available for around $4000, which is actually an excellent deal. And speaking of Atomos, they had a gigantic booth with BMX riders and lots of giveaways. We had come to the raffle with our ticket, full of hope… But in a dramatic twist, our ticket number ended up being just 7 digits away from winning the Nikon/Atomos Filmmaker’s Kit! *very sad face*

But back to Nikon. At this year’s NAB Show, the company announced the fastest lens in their history: the Nikkor Z 58mm f/0.95. Nikon does not yet know, when the lens will become available to the public. Many filmmakers seemed very excited about this lens, and hope that it will eventually make its way into cinema as well.

The Z-Cam (a rapidly emerging cinema and 360-degree video camera company from China) booth was a pleasant surprise. We had them on our list of cameras to check out and weren’t sure what to expect. When we first got our hands on the E2C, we were instantly impressed: the build quality of the aluminum body felt solid, the user interface was intuitive, and well represented on the on-camera menu screen. For its relatively small size, the E2 is a beast: Micro Four Thirds CMOS sensor, 13 stops dynamic range, 10 bit color depth (H.265), and 4K recording at 120 fps! All for $2000?! That’s a steal.

The camera relies heavily on the iOS/desktop app for control and monitoring: its own display is very small. However, the camera also has an Ethernet port, which means you can live stream from it!

The Z-Cams on display at NAB Show 2019 were rigged up with a variety of SmallRig cages and mounts, really showing off the expandability of the line to build into impressive cine camera rig. With upcoming models that will expand into 35mm, 14 bit RAW, 6K, 8K, and NDI functionality this camera line is one to watch for anyone looking at a lesser cost alternative without sacrificing functionality.

Speaking of SmallRig: they had a live stream going throughout the NAB Show, and we are proud to say that were using our own Webcaster X2 to go live!

Finally, Epiphan Video also used NAB as an opportunity to announce our partnership with Canon. We will be releasing a live streaming solution, which will include the Webcaster X2 bundled with one of the following four Canon cameras: Vixia HF R82, G21, G50, or the XA11 (buyers choice).

6) Brightcove acquires Ooyala and continues to focus on video monetization

We were surprised to learn that Brightcove, an online video platform, had recently acquired Ooyala, another video platform. Brightcove is continuing to develop their products, especially Brightcove Live, which is their live streaming platform.

The newly fortified Brightcove was talking a lot about better content monetization for all, but especially for sports broadcasters. Fan engagement is a key part of this, according to director of solutions marketing Andy Wilson. In his opinion, the most important part of successful live stream monetization is the ability to promote the urgency of an upcoming event in a timely fashion. For example, being able to quickly share highlight reels on social media is key to engaging fans and leading them to the full, paid version. One of the tools offered by Brightcove automatically creates highlight clips of live sporting events and posts them on social media.

The JVC GY-HC500 and 550 are able to live stream or FTP file upload over IP directly from the camera. Both are capable of reliable 1080p streaming at up to 20 Mbps and less that 500 ms latency. Both cameras feature a 1” 4K CMOS sensor and integrated 20X zoom lens with built-in ND filters and manual zoom, focus, and iris control rings. The 500 Series records several native 4K UHD and HD file formats to SDHC/SXHC cards, as well as to SSD media in 10-bit ProRes 422 at 4K resolution and 50/60p frame rates. One of our favorite features of the HC550 is the ability to add live graphic overlays such as titles and scoreboards.

While the 500 Series cameras are great, keep in mind that these are not your average consumer camcorders. These cameras will run you about $4000 – $5000.

Insta360, a company that specializes in 360 degree video capture, showed up this year at NAB Show 2019 in a big way. Their booth was a maze of cameras and displays showing off their extensive line, several immersive 360 headsets, and one new BIG 360 cine camera called Titan. Priced at $15,000, the Titan is a literal behemoth. Recording at 11K offers “No-Stitch” editing, giving viewers a more seamless experience. It also offers a wealth of other features, including 4K live streaming, image stabilization, and improved low light performance. Stay tuned to Live @ Epiphan show in the future, where we will be trying out some of Insta360 gear and streaming live in 360° using a Pearl-2!

9) Lights that talk to each other

Aputure, a company that specializes in lights, was very enthusiastic throughout the show and made many exciting announcements. First off, they released their 300D Mark II light, which incorporated a lot of their customers’ feedback from the first version. Overall, we noticed that Aputure seems to be really good at listening to consumer feedback and use that crowd wisdom to better their products.

The news that made the biggest splash at NAB Show 2019 is probably Sidus Link, a remote control app which allows all their lights to form a single network via a bluetooth SIG mesh network. The lights are now both receivers and transmitters of information. This means that all their lights are able to build their own network and talk to each other (even if the phone with the app is dead or out or range). Through the app, you are able to group lights together, control their color and intensity, sample and assign color using the phone’s camera, and even add effects like explosions, sirens, or any other rhythmic and/or synchronized behavior. The app even allows you to save these effects and share them with others.

Another addition to their family of light products were RGB light bulbs for filmmakers. They look like regular light bulbs, but they can take on any color and even work without external AC power (they have internal batteries).

10) Video production in the cloud is leaping into the future

It’s no secret that we’ve always been interested in video production and video editing in the cloud. That’s why we paid special attention to all and any progress being made in this field. Lucky for us, there was a lot of talk about cloud-based video production applications at NAB Show 2019.

One cool example was the partnership of the video editing giant AVID and Bebop Technology to make Avid’s creative tools and MediaCentral powered workflows available in Microsoft Azure cloud, including Media Composer, Avid NEXIS. This means users can quickly find, edit and share media from any location, making it easier to manage media, prepare projects and keep everyone in sync.

Finally, Mediakind launched its Cygnus 360º-as-a-Service (360aaS) solution for live events, offering a cloud-based workflow for live 360º video processing and multistreaming. This solution will allow content owners and operators to efficiently capture and process live 360º video at up to 8K resolution and deliver immersive content to the consumer with delivery bitrates of between 10Mbps to 15Mbps.

And that wraps up our top 10 newsworthy moments of NAB Show 2019. Overall, we had a great time at this years’ NAB Show. Thanks to everybody who came by the booth, and we are already looking forward to exhibiting next year!